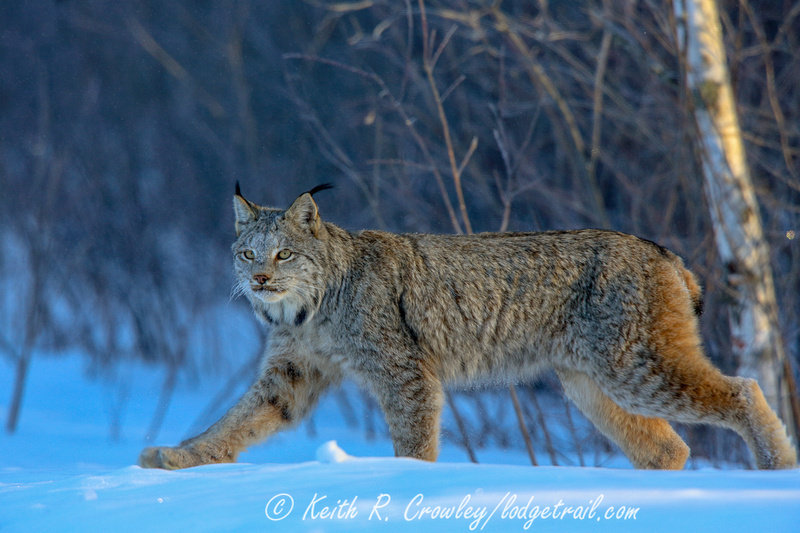 Did I see a bobcat or a Canada lynx ?

This question has been popping up on social media a lot this winter, probably because lynx sightings appear to be on the rise. At least there have been more sightings this winter in my area of the Upper Midwest.

Positive identification is tricky; these wild felines have a lot of similarities, and it’s difficult to tell them apart if you aren’t used to seeing them. I’m lucky enough to live in an area where their ranges overlap, so I get to see both species on occasion. But then I spend a lot of time looking for them, too. Usually all I find are tracks.

Both lynx and bobcats are secretive animals and are rarely seen, especially in daylight. They are primarily nocturnal hunters, feeding on a wide variety of small mammals, birds, and even reptiles in the summer. Lynx tend to specialize in Snowshoe hares, and the lynx population rises and falls with hare populations, but like most predators, they will eat whatever they can catch. Bobcats are less picky and will hunt a wider variety of prey. Both lynx and bobcats will occasionally tackle prey that is much larger than themselves, up to and including deer-sized animals. It all depends how hungry they are.

To add further to the confusion, bobcats (Lynx rufus) and Canada lynx (Lynx candensis) are known to interbreed, but since that’s a rare occurrence we’re going to stick to the differences in pure examples of their species.

The first thing to note is that the size of the animal isn’t a very good way to determine what it is. A big male bobcat in my area can weigh 30 pounds, that’s easily in the weight range of lynx here, too.

Much more telling if you only get a glimpse is that bobcats are noticeably shorter than lynx,  in length, and especially in height.

Lynx have very long legs – particularly their hind legs. A lynx almost appears to be walking on stilts compared to a bobcat. Lynx also have a much grayer look to them than the reddish brown of bobcats.

Around here some people call lynx the “Gray ghost,” both as a reference to their reclusive, silent nature, and the color of their coats. Lynx may show some spots and speckling, but compared to a bobcat, which is generally highly spotted, lynx look much more uniform.

Ear tufts also can help with ID, since lynx ear tufts are generally much longer than a bobcat’s. But since both species have the tufts, unless they are standing side-by-side you may not be able to perceive the difference. The same holds true for the ruff around their faces. Lynx ruffs tend to be more pronounced, but unless you can see them next to each other, the difference will be tough to see.

Besides the length of the legs, the size of the feet is one dead giveaway. Lynx feet are gigantic compared to the bobcat’s. Let’s face it, lynx feet are huge compared to a lot of things. Relative to their body size, lynx feet are among the biggest in nature. They have to be. Since lynx primarily feed on snowshoe hares, those big, furry feet are a real asset in chasing prey through deep snow.

But probably the easiest way to determine which cat you are looking at is by checking the tail. Both cats have “bobbed” tails, but a lynx tail is tipped in all black fur. Bobcat tails have white undersides and distinct banding. So, if you only catch a glimpse of a wild cat darting across a road or through the forest, focus on the tail. If you see white on the underside of the tip and bands of darker fur along its length, it’s a bobcat.

If the tip is all black, you have yourself a lynx.

Of course, it also helps to know if you are even in the range where Canada lynx are found. They are primarily a Boreal forest species, found only in the northern tier of U.S. states, Canada, and Alaska. There are a few lynx in the high country of the Central Rockies, but if you want to see lynx, go north.

Bobcats, on the other hand, are much more widespread and are found pretty much across the lower 48 states of the U.S. and much of Mexico. The population of bobcats is much higher overall than the lynx population, so if you see a wildcat anywhere other than deep in the Boreal woods, chances are it’s a bobcat.

But there are plenty of lynx out there if you know where to look. And if you are really lucky, you may just get to see something like this:

Here is that side-by-side comparison one more time. Click to enlarge (opens in new tab):

All photographs and text appearing here are copyrighted. No unauthorized use of the text or images is allowed without written permission from Keith R. Crowley and Lodge Trail Media.

For questions or licensing information, visit us at www.LodgeTrail.com

2 thoughts on “Bobcat or Lynx: A User’s Guide”